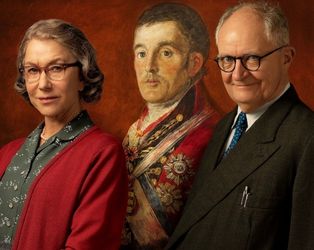 The final film by the late Roger Michell (Venus, 2006; Le Week-End, 2013) recounts the true story of the theft of Goya’s portrait of the Duke of Wellington from London’s National Gallery in 1961. Retired Newcastle bus driver Kempton Bunton (Jim Broadbent) is fixated on his quixotic campaign for free television licenses, to the despair of his wife Dorothy (Helen Mirren), but with the full support of son Jackie (Fionn Whitehead). A trip to London results in the stolen painting being hidden in his back bedroom. When he eventually returns it to the Gallery in person, he is arrested, and given a trial that affords Kempton a platform from which to expound his worldview. Broadbent is at his most amiably avuncular, given strong support by Mirren, Whitehead, and Matthew Goode as his defence lawyer in this hugely likeable account of a true British eccentric.