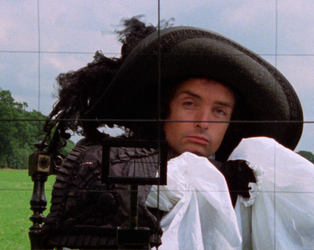 When an ambitious draughtsman is engaged by the wife of an aristocrat to produce a series of 12 drawings of her husband’s estate, the conditions of his employment set in motion a lurid series of events including sex, blackmail, and murder.

Following a number of shorts and debut feature The Falls (1980), all of which could be classified as experimental, The Draughtsman’s Contract, digitally restored and re-released on its fortieth anniversary, saw Peter Greenaway take a somewhat more conventional approach. This paid rich dividends, garnering the director international acclaim and attention parlayed into a career of work that is frequently breathtaking, whether for its sumptuous imagery, its remarkable erudition and wit, or its often deliberately provocative nature. The film is also responsible for bringing to a wider audience the work of Michael Nyman, whose pulsing, Purcell-inspired score features prominently throughout.