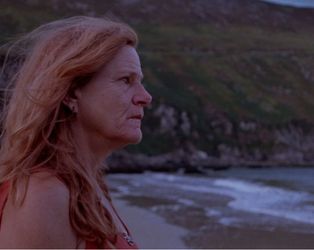 Dónal Foreman will be present for a Q&A following the 18.20 screening on Friday 2nd. Tickets for all other screenings will go on sale here.

A grieving American filmmaker (Dale Dickey) and her Irish assistant (Judith Roddy) tour the west of Ireland, researching a film about Granuaile, the legendary 16th century rebel and ‘pirate queen’. The women develop an uneasy intimacy as they journey towards a remote Atlantic island, where boundaries begin to blur between past and present, myth and history, dream and reality, presenting a wide-eyed American beguiled by Ireland. Filmed on granular 16mm with a swoony orchestral score, the film is playful but assured in its homage to an earlier cinema aesthetic while the film’s locations provide a majestic backdrop to the action.

The Cry of Granuaile is the first feature funded through the Arts Council’s Authored Works initiative in which IFI are Exhibition Partners.