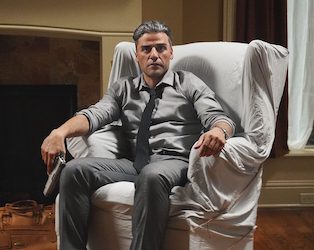 William Tell is the pseudonym of a former marine turned professional gambler played with steely control by a mesmerising Oscar Isaac. A master card sharp, Tell tours the anonymous towns of middle America, playing poker and blackjack in strip mall casinos; he has learned to fly under the radar, playing for low stakes, and never winning enough to be noticed. Tell’s meticulously ordered life is thrown into disarray when he encounters Cirk (Tye Sheridan), a young man seeking revenge on a mutual enemy. Tell takes the boy under his wing in an attempt to atone for past sins. As in First Reformed (2017), writer-director Paul Schrader uses the familiar dynamics of a genre movie to explore a national trauma, environmental catastrophe in the earlier film, and here the gross abuses in the Abu Ghraib terrorist detention centre, once again repurposing his recurring ‘God’s lonely man’ figure to winning effect.