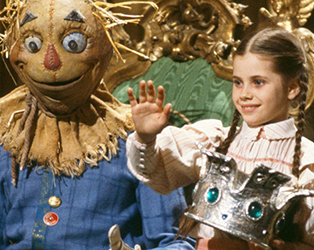 Following the Walter Murch Masterclass in September, we are delighted to screen Return to Oz on 70mm, as chosen for The Bigger Picture by writer, filmmaker and lecturer, Aislinn Clarke (The Devil’s Doorway).

Based on Frank L Baum’s novels, Ozma of Oz and The Marvelous Land of Oz, fans of the classic 1939 musical got something very different in this much darker adventure. Dorothy has trouble sleeping, with nightmarish visions of a place called Oz. When sent for psychiatric treatment, she is saved by a storm which carries her back to a ruined Oz, populated by strange creatures, including a Nome king and mechanical Tik-Tok. Elaborate special effects and terrific early claymation (Henry Selick on storyboard!) contribute to this fantasy world from which Dorothy seeks to escape.