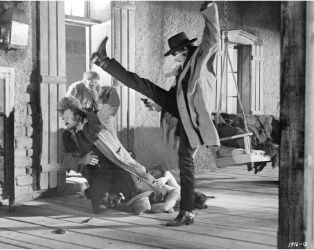 Lincoln County, 1881. Times are changing, but not Billy the Kid (Kris Kristofferson), who is committed to following his outlaw destiny to the finish. He clashes with former friend Pat Garrett (James Coburn), now a lawman who has learnt to recalibrate his ways, and adjust to encroaching civilisation. Garrett’s pursuit of the Kid develops into an endeavour to eradicate his own past. Plagued by production interference, Peckinpah still managed to produce one of the great elegiac westerns of the 1970s. The presence of Bob Dylan, whose music provides an effective, ballad-like commentary on the action, gives the film a contemporaneous spin.

The screening will be introduced by journalist and broadcaster Pat Carty, who dives into what makes Pat Garrett and Billy The Kid so great here.