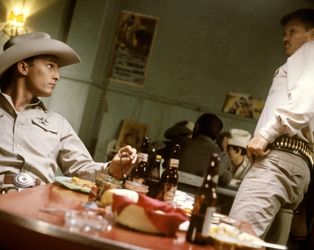 Following his Irish adventure with family fantasy The Secret Of Roan Inish (1994), writer-director John Sayles moved to Texas for a film that blends elements of the Western with mystery and noir to stunning effect.

Following the discovery of a body on an army base, Sheriff Sam Deeds (Chris Cooper) is drawn into investigating the death of one of his recent predecessors. While his work leads to the rekindling of an old romance with local teacher Pilar (Elizabeth Peña), it also uncovers family secrets that cast shadows over every aspect of Deeds’s life. One of Sayles’s most acclaimed films, with a supporting cast that includes Matthew McConaughey and Kris Kristofferson, Lone Star stands as one of the finest American independent films of the 1990s.

The screening will be introduced by filmmaker Luke McManus.