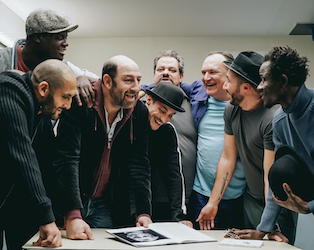 Étienne (Kad Merad), a passionate, if frequently-out of-work, actor, runs a prison theatre workshop where he introduces an unlikely troupe of would-be actors to the challenging work of Samuel Beckett. Encouraged by the raw talent he uncovers in the disparate group of prisoners, Étienne conceives an idea to perform Waiting for Godot outside the prison walls, on the stage of a theatre in Paris to a paying audience. Proving the adage that truth is stranger than fiction, Emmanuel Courcol’s delightful ode to friendship, and the redemptive nature of art, was inspired by real events that took place in Sweden in 1985 when an actor attempted to stage a public performance of Godot with a group of inmates from a high security prison in the historic Gothenburg City Theatre.

IFI French Film Club: Tickets for the 18.15 screening on the June 28th will cost €10.00 for IFI and Alliance Française members.