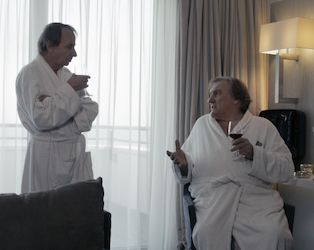 Director Guillaume Nicloux reunites ultra-mediatised provocateur Michel Houellebecq and larger-than-life Gérard Depardieu at the laboratory-like seawater spa in Cabourg, Normandy where they undertake a strict health regime. Denied his usual vices of smoking and drinking, the writer finds solace in the bacchanalian and gargantuan presence of France’s most famous actor, with the two casually shooting the breeze amid all their algae wraps, mud massages and cryotherapy treatments, while sneaking in cigarettes and alcohol whenever they can. Nicloux relishes the game here, playing with the real and fictional identities of Houellebecq and Depardieu. Documentary, fiction, truth and lies collide in the brilliantly comic, tragic and grotesque Thalasso.