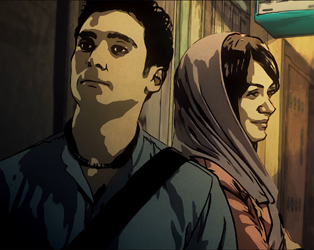 This film was released 5th October 2018, and is no longer screening.

An unsparing glimpse behind Iran’s façade of moral conservatism, Tehran Taboo follows three characters in crisis as each attempts to navigate a path through the hypocrisies and inequalities of the country’s repressive regime.

Director Ali Soozandeh imaginatively employs distinctive rotoscoping animation to bring his story to life as shooting a film as replete with sex, drugs and corruption as this on the streets of Tehran would prove prohibitively challenging.

Pari (Elmira Rafizadeh), a prostitute, is seeking a divorce from her drug-addicted husband. She moves into a new apartment where her life intersects with that of Sara (Zahra Amir Ebrahimi), a housewife longing for a job to escape her in-laws, and Babak (Arash Marandi), a musician desperately trying to deal with the repercussions of having sex with Donya (Negar Mona Alizadeh), who is engaged to another man.