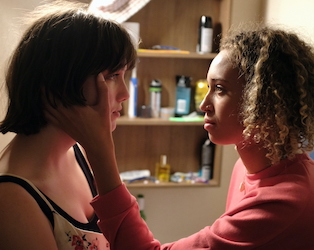 For seventeen-year-old AJ (Nell Barlow) planning a gap year to knit jumpers for elephants is much more appealing than spending a week with her family at a British seaside holiday park. Nevertheless, she finds herself on a four-hour car journey to the Dorset coast with her mum Tina (Jo Hartley) and little sister Dayna. Her father is not along for the ride, something which is a largely unspoken source of tension between AJ and her mum. At the park they are met by her overbearing older sister Lucy (Sophia di Martino) and her boyfriend Steve (Samuel Anderson). AJ is resigned to a week of hell, that is until she lays eyes on the resident lifeguard, the free-spirited Isla (Ella-Rae Smith), and is instantly smitten. Winner of the audience award at the Glasgow Film Festival, Marley Morrison’s debut feature is a touching, witty, and well-observed portrait of an adolescent who hasn’t quite learnt how to navigate the world as a young lesbian.