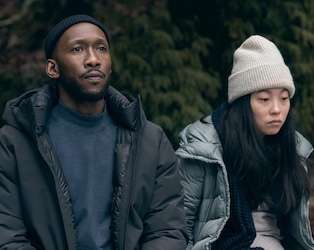 Cameron (Mahershala Ali) is terminally ill, a fact he hides from his wife Poppy (Naomie Harris), and young son. Presented with an alternative solution by his doctor (Glenn Close), Cameron contemplates secretly replacing himself with a clone, with which his consciousness has been synched, to spare his family the devastation of losing him. For his debut feature, Irish writer-director Benjamin Cleary, whose short film Stutterer won an Academy Award in 2016, has not only assembled an astonishing cast, with two-time Academy Award-winner Mahershala Ali delivering an extraordinary dual performance, he is also unafraid to grapple with weighty topics such as grief, love, the fallibility of memory, and the very nature of humanity. Thought-provoking, and visually striking with an eye for clean, minimalist compositions, Swan Song wears it’s plausible near-future sci-fi credentials lightly and is far more concerned with the emotionally compelling human story at its core.