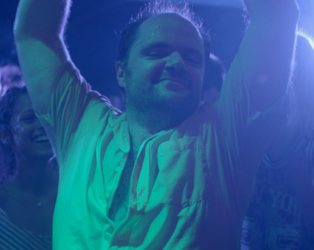 This film was released on Friday 28th  April 2017 and is no longer screening.

As what director Argyris Papadimitropoulos describes as “a coming-of-middle-age story”
begins, Kostis, a doctor in his early forties, arrives on a sleepy resort island to take up his new position as its sole resident physician.

It is winter, and the sleepy island, population 800, is lashed by inclement weather. However, in summer, the population explodes as it becomes a destination for hedonistic holidaymakers.

After treating Anna, Kostis engineers a meeting on the island’s nude beach with her and her friends. Casually invited into their fold, he becomes part of the in-crowd, spending his nights partying while he neglects his responsibilities and becomes increasingly obsessed with Anna, blind to the realities of the situation and the uncomfortable chasm that separates this doughy, ageing introvert from the lithe, beautiful younger people who move from tolerance to irritation at his constant presence.