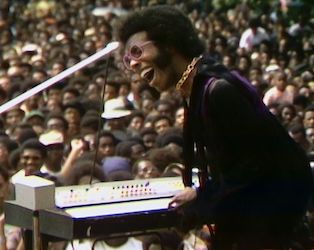 In 1969, during the same summer as Woodstock, a different music festival took place 100 miles away. More than 300,000 people attended the summer concert series known as the Harlem Cultural Festival. It was filmed, but after that summer, the footage sat in a basement for 50 years. In his striking debut as a filmmaker, Questlove, founding member of seminal Philadelphia hip-hop group The Roots, presents this transporting documentary – part concert film, part historical record – about an epic event that catalysed a re-evaluation of Black history, culture, fashion, and music. Not only is the film brilliantly assembled and edited, and highly entertaining, with incredible performances from artists such as Stevie Wonder, Sly and the Family Stone, and Nina Simone, but it also functions as an important piece of restoration, shining a light onto a hidden corner of cultural history, and is every bit as relevant to audiences today as we continue to grapple with issues of racial identity.