In 1879, fifteen people in the village of Knock, Co. Mayo witnessed an apparition of the Virgin Mary.  The village was declared a Marian Shrine and today welcomes over one million pilgrims annually. Aoife Kelleher (One Million Dubliners) builds a vibrant portrait of the phenomenon through its devotees – invalids seeking cures; the eight sibling owners of rival religious merchandise shops; a woman relieved of MS during a 1970s pilgrimage; feisty Mildred, advocate for gender parity  for the shrine’s handmaids; the staff  of the Knock Marriage Bureau; and  Fr. Richard Gibbons, the charismatic, outward-looking Parish Priest, working to attract transatlantic visitors to the shrine.

With its references to ‘the scandals’, falling church attendances and the eighth amendment, the film presents a timely reflection on the position of the Church in modern Ireland and a compelling glimpse into an anachronistic but thriving world. 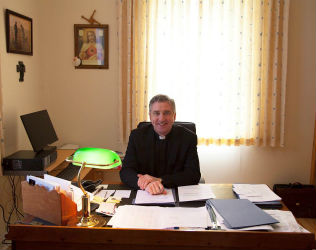