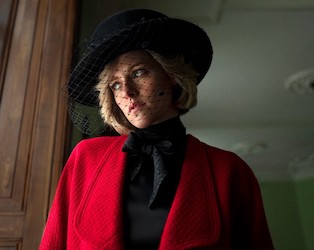 Spencer follows three days in the life of Diana, Princess of Wales (Kirsten Stewart) as she endures Christmas with the Royal Family at their Sandringham estate, presided over by the spectral presence of the all-seeing Major Gregory (Timothy Spall). Diana is depicted as captive to fame and privilege, and the regime of strict adherence to protocol that governs her life as a royal. Her husband’s affair with Camilla Parker Bowles has become public knowledge, and the fairy-tale façade of their marriage has crumbled. A companion piece to Larraín’s previous portrait of a female icon in crisis, 2016’s Jackie, Spencer elegantly balances fact and conjecture. Concerns around over-familiarity with Diana’s story are immediately allayed by Larraín’s fresh and imaginative take on the material, billed as a ‘fable from a true tragedy’, which synthesises Claire Mathon’s swooning cinematography, Kirsten Stewart’s magnificent performance, and Johnny Greenwood’s jazzy, slightly menacing score, into a marvellously cohesive whole that proves to be intoxicatingly cinematic.