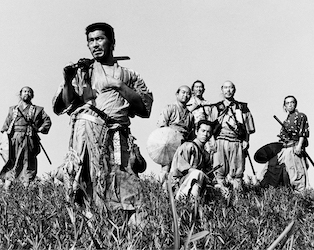 Screening only until November 4th.

Perhaps the most revered of Akira Kurosawa’s many masterpieces, Seven Samurai stands as one of the most influential films ever made, a lofty accolade which can distract from just how breathlessly thrilling and entertaining it is. A small farming community is forced to hire ronin, mercenary samurai, as protection from bandits plundering their crops. They persuade seven warriors, led by the wise and experienced Kambei (Takashi Shimura) to come to their defence. Six of the group are genuine samurai; the seventh, Kikuchiyo (Toshiro Mifune), a mercurial rogue, is a lowly farmer’s son masquerading as a warrior. The film was remade as a Western in The Magnificent Seven (John Sturges, 1960), and as sci-fi in Battle Beyond The Stars (Jimmy T. Murakami, 1980). With nuanced characterisation, lively humour and masterfully-staged action scenes, Kurosawa’s beautifully paced film is an epic for the ages.