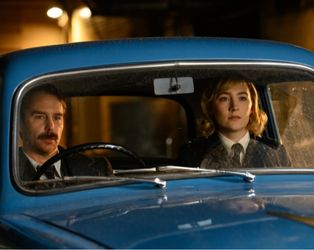 London in the ‘50s – plans for a big-screen adaptation of Agatha Christie’s play The Mousetrap, which has taken the West End by storm, come to an abrupt halt when Leo Kopernick (Adrien Brody), the beleaguered Hollywood producer behind the project, is found murdered backstage. Investigating the crime is the seasoned and frequently inebriated Inspector Stoppard (Sam Rockwell), a taciturn man of few words who has, much to his chagrin, been paired with Constable Stalker (Saoirse Ronan, exercising her gift for light comedy), a naive, over-eager rookie, who leaps to absurd conclusions at every opportunity.
The mismatched pair find themselves thrown into a puzzling whodunit within the glamorously sordid theatre underworld, where everyone is a potential suspect. With a glittering supporting cast including Ruth Wilson, Reece Shearsmith, Harris Dickinson and David Oyelowo, Tom George’s delightful period confection proves utterly irresistible.