It would be fair to say that this film surpassed all expectations. Fearing that Thomas Keneally’s novel would prove too strong for Spielberg’s sensibility, critics and audiences alike were taken aback by the film’s monochrome grimness and documentarystyle immediacy that betokened the director’s determination to capture truthfully the memory of horror on an almost unimaginable scale. Oskar Schindler (Liam Neeson in a fine performance) is a slick manufacturer who sees a financial opportunity to employ oppressed Jews in Nazi-occupied Poland as virtually slave labour to maximise his profits. However, as the horror of the Holocaust unfolds before him, his scheme metamorphoses into an opportunity to save lives.

A study of heroism and moral choice, the film also seems a project that compelled Spielberg to ponder fundamental questions about his Jewish identity and his responsibilities as a filmmaker. Some false notes and a slide towards sentimentality near the end are minor blemishes on what is a remarkable achievement. (Notes by Neil Sinyard.) 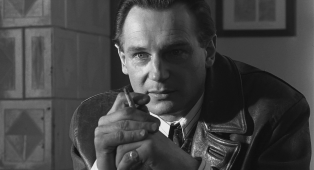