Spielberg’s opening reconstruction of the storming of Omaha Beach by American soldiers on D-Day achieves a combat accuracy that makes the sequence almost unwatchable in its unrelieved slaughter. This is warfare deglamourised, red in tooth and claw.

The central plot concerns a mission behind enemy lines, led by Captain Miller (Tom Hanks), to find Private Ryan (Matt Damon) whose three brothers have recently been killed in action and who is to be sent home as an act of compassion. As the danger increases and where acts of humanity will get you killed, the mission’s incongruity (eight men’s lives being risked to save one?) triggers near-mutiny amongst the recruits; and the search will culminate in another agonisingly prolonged battle as the trapped men fight for their lives against advancing German soldiers and tanks that grind relentlessly towards them like a nightmare without end.

It’s an assault-course of a movie that hurls an audience with rare ferocity into the sights and sounds of war. (Notes by Neil Sinyard.) 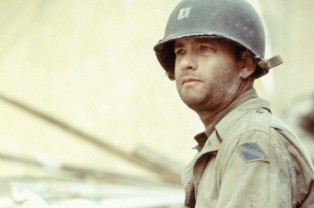