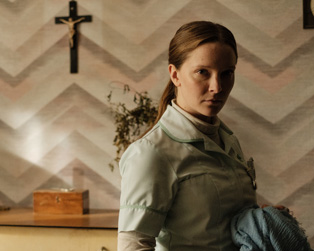 Following an unspecified incident at her previous job, a young nurse (Morfydd Clark) turns her back on her former existence, taking the name Maud, embracing religion with fervour, and becoming a live-in carer for the terminally ill. Assigned to dancer Amanda (Jennifer Ehle), the now-puritanical Maud is repulsed and intrigued by the manner in which her charge has chosen to see out her final days, filled with casual sex and drug-fuelled parties. At the same time, Amanda’s fear of death sees her cautiously curious about Maud’s beliefs, and an uneasy truce is formed. The serpentine relationship between the two eventually ruptures, and Maud withdraws deeper into the embrace of her beliefs, reaching a point where the line between damnation and a state of grace is blurred. Clark’s extraordinary performance is the heart of a film that compassionately examines religious compulsion and mental disintegration.