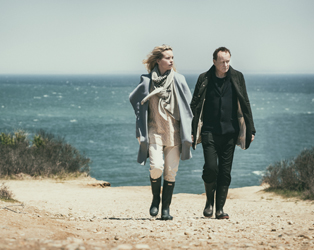 This film was released on Friday 6th October 2017 and is no longer screening.

In this latest film from Volker Schlöndorff (The Tin Drum), world-weary Berliner Max Zorn (Stellan Skarsgård) arrives in New York to promote his latest book, a fictionalised memoir of an old romance, and to reunite with his young wife Clara (Susanne Wolff). The city ignites memories of his former love, Rebecca (Nina Hoss), now a coolly successful lawyer who initially spurns his attentions but soon thaws and invites him to travel with her to the seaside town of Montauk.

In his screenwriting début, Colm Tóibín has pulled off a neat trick in his creation of Max, a character who is riveting despite being pretty unlikeable, self-absorbed and oblivious to the intellectual charms and emotional complexities of the women who surround him. Here is an adult tale, filled with sumptuous locations and colourful peripheral characters of yearning and misremembrance of things past.