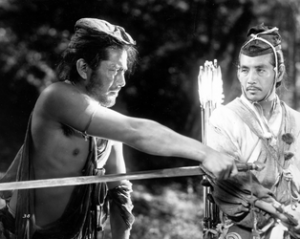 Set in 11th century Japan, Akira Kurosawa’s formally audacious masterpiece is a spellbinding investigation into the relative nature of truth. Three characters take shelter from a storm under Kyoto’s Rashomon gate and relay conflicting accounts of the recent murder of a samurai and the rape of his wife, their discordant perspectives revealing the subjective nature of each version of the story, which is recounted from the viewpoint of each of the participants, including the bandit, played with gleeful exuberance by Kurosawa regular, Toshiro Mifune, and the ghost of the murdered man, conjured by a medium. A breakout commercial success, Rashomon announced Kurosawa, and indeed Japanese cinema, to the world stage, winning the top prize at the 1951 Venice Film Festival and the Oscar for Best Foreign Language Film whilst in the process gifting the phrase ‘Rashomon-like’ to our cultural lexicon.