RAIDERS OF THE LOST ARK

Produced by George Lucas, this mega matinee show is Spielberg’s homage to the classic adventure serials he loved as a child. A whip-cracking archaeologist called Indiana Jones (Harrison Ford) becomes involved in a race to prevent the Ark of the Covenant from falling into the hands of the Nazis and hence giving them invincible power.

The film made a star of Harrison Ford, who gives Jones exactly the right degree of self-deprecating swagger; and Karen Allen is the embodiment of the kind of heroine they used to call spunky. From the classic opening, where a giant boulder chases Indiana down a boobytrapped cave, it is a film of perpetual motion, blithely sweeping through some occasionally questionable violence and racial stereotyping to arrive at a rousing finale and a closing allusion to Citizen Kane, no less. Spielberg needed a box-office success after the critical and commercial disaster of his overblown comedy 1941 and Raiders delivered a hit, a hero, and a franchise. (Notes by Neil Sinyard.) 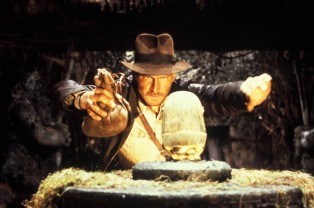