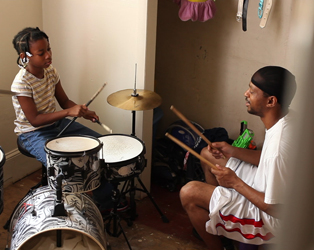 ‘You don’t know how we live’ says Christine’a Rainey (aka Ma Quest) to the TV as a campaigning Donald Trump addresses his ‘What do you have to lose?’ message to African Americans. This moment comes towards the end of Jonathan Olshefski’s engrossing documentary in which we observe the Rainey family over a nine-year period from 2008. Through the peaks and troughs of the Obama administration, things have never been easy for the North Philadelphia family, but this TV broadcast suggests they are going to get a whole lot worse.

Christine’a’s husband Christopher (aka Quest) is a music producer with a DIY home studio. His eldest son is being treated for cancer, and circumstances are about to deliver an unexpected blow to his youngest daughter, P.J. Granted extraordinary access, Olshefski’s film is an intimate and insightful family portrait.