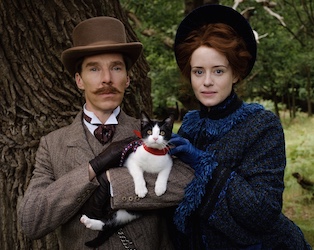 This screening will be followed by a pre-recorded Q&A, hosted by Edith Bowman, with Benedict Cumberbatch, Claire Foy and director Will Sharpe.

The life of eccentric Victorian polymath Louis Wain forms the basis of director Will Sharpe’s entertaining and moving film. Forced to provide for his mother and five younger sisters following the death of his father, Louis (Benedict Cumberbatch) finds employ as a freelance artist for the disingenuous (though ultimately kindly) Sir William Ingram. Following a typically unusual courtship with his sisters’ governess, Emily (Claire Foy), the two marry, and take in a kitten found in the rain. When Emily takes ill, Peter the kitten proves a great comfort, and Louis takes to portraying cats in a variety of charming tableaux that quickly become a hit with the general public, inspiring a new trend of adopting them as pets. However, Louis is visited by successive personal tragedies that precipitate a steep decline in his mental health, tipping preoccupation into obsession.