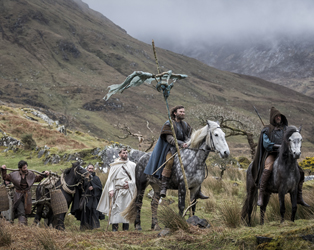 Cistercian monk Brother Geraldus (Stanley Weber) arrives on the shores of early-13th century Ireland with the aim of obtaining a religious relic of great significance from a remote community of fellow monks.

His ultimate goal is to present the object to the Pope in Rome as a source of divine power from which to draw righteous strength while planning and undertaking another crusade for the capture of Jerusalem. On the journey, the relic is to be watched over by selected monks, including a young novice (Tom Holland, recently introduced to the Marvel universe as the new Spider-Man), and the order’s mute servant (Jon Bernthal, The Walking Dead).

As they attempt to reach the coast however, they are beset on all sides by those who would take the sacred object for themselves in this violent and authentic period piece.