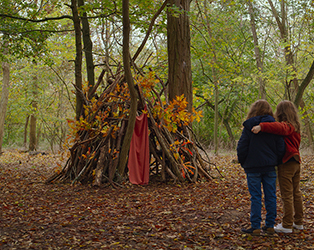 8-year-old Nelly has just lost her beloved grandmother and is helping her parents clean out her mother’s childhood home. She explores the house and the surrounding woods where her mother, Marion, used to play and built the secret hut she’s heard so much about. One day her mother abruptly leaves. That’s when Nelly meets a girl her own age in the woods building a treehouse. Her name is Marion. After playing together, they go back to Marion’s house, which appears to be a mirror-image of Nelly’s mother’s childhood home. Céline Sciamma’s enigmatic fifth feature is a perfectly formed miniature – delicate, elegant, and jewel-like in its refined understatement. DOM

Director’s note: 10 years on from Tomboy, with grace and delicacy director Céline Sciamma continues her powerful exploration of female identity.