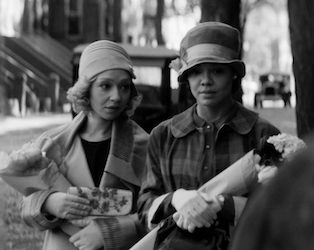 Rebecca Hall’s assured directorial debut, an adaptation of Nella Larsen’s novella, explores the idea of passing, where a person of one social group ‘passes’ for a member of another. The setting is New York City in 1929; Irene, an African American resident of Harlem (Tessa Thompson), has a chance encounter with Clare (Ruth Negga), a friend from school she has lost contact with. Clare is now married to John (Alexander Skarsgard), a wealthy, and unapologetically racist white man, yet her light complexion has allowed her to pass for white, deceiving both her husband and the society circles of New York in which she mingles. Clare begins to frequent Irene’s home, hoping to reconnect with her black heritage, becoming both a distraction for Irene’s husband Brian (Andre Holland), and a source of anxiety for the increasingly dissatisfied Irene. With exemplary performances, and filmed in gleaming monochrome, Passing is a powerfully restrained work by a filmmaker in total control of the material.