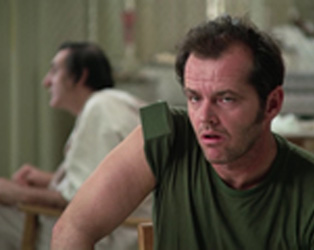 Jack Nicholson gives what is perhaps his most indelible performance as Randle Patrick McMurphy in Miloš Forman’s masterpiece, one of just three films to win all five major Academy Awards. The film sees recidivist criminal McMurphy being moved from prison to a mental institution where he hopes to serve out his sentence in peace.

However, he immediately locks horns with nurse Ratched, a harsh disciplinarian memorably played by Louise Fletcher; RP’s attempts to undermine her authority are the source of the film’s irreverent humour, yet Forman’s larger concerns about oppression and the place of the individual in society are evident in the emotive last act which culminates in an iconic act of defiance.

Miloš Forman’s The Loves of a Blonde and The Firemen’s Ball will screen as part of our Intimate Lighting: The Czech New Wave season.