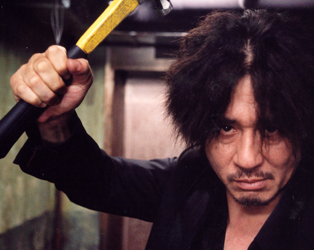 This film was released on Friday 2nd August 2019 and is no longer screening.

Often cited as one of the best films of the 2000s, Oldboy is a brutal, lyrical modern classic of the revenge genre. The film tells the tale of Oh Dae-su (Choi Min-sik), a businessman who is inexplicably kidnapped and imprisoned in a hotel room-like cell for 15 years, without knowing his captor or the reason for his incarceration. Eventually released, he learns of his wife’s murder and embarks on a quest for revenge whilst also striking up a romance with a young sushi chef, Mi-do (Kang Hye-jeong).

He ultimately finds his tormentor, but their final encounter will yield yet more unimaginable horrors. Directed with immense flair by Park Chan-wook (The Handmaiden) as the second instalment of his Vengeance Trilogy, Oldboy is an irresistible concoction of filmmaking virtuosity, ingenious plotting, pathos and bracing violence.