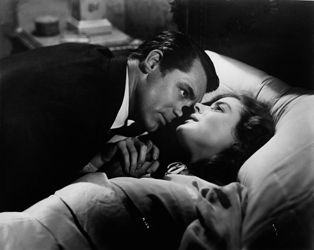 This film was released on Friday 9th August 2019 and is no longer screening.

Presented in a new 4K digital restoration, Notorious marked Alfred Hitchcock’s second collaboration with both Cary Grant and Ingrid Bergman, and reunited the latter with Casablanca co-star Claude Rains. From a script by prolific author Ben Hecht, another frequent Hitchcock collaborator, the psychological complexity of its central characters’ interactions and motivations have led to ongoing critical assessment of the film raising it to the uppermost tier of the director’s work.

Alicia (Bergman), the daughter of a convicted Nazi spy, is enlisted by Devlin (Grant) to use her father’s bona fides to infiltrate and surveil a Nazi organisation in post-war South America. Although she and Devlin have fallen in love, the mission requires her to become romantically involved with the group’s leader (Rains), confounding their relationship in a film whose dark undercurrents of obsession never distract from its success as entertainment.