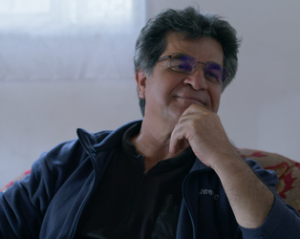 In 2011, the Iranian authorities banned director Jafar Panahi from making films for 20 years. Undaunted, Panahi responded with a series of innovative films – This is Not a Film, Closed Curtain, and Berlin Film Festival Golden Bear winner, Taxi Tehran – which capitalised and commented on the straitened conditions in which they were made.

Panahi has recently been imprisoned for six years, adding renewed urgency to No Bears, his exceptional new work. In another of his signature virtuosic sleight of hand manoeuvres, the director appears as himself, relocated to a rural town to remotely direct a crew making a film on the other side of the Iranian border in Turkey. Panahi builds a story about a couple attempting to secure fake documents so they can flee to France, while at the same time, he becomes unwittingly embroiled in the local politics of the village.