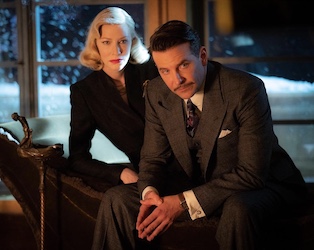 Nightmare Alley sees Oscar-winning director Guillermo del Toro trade the fantastical creatures of Pan’s Labyrinth, Hellboy, and The Shape of Water for monsters of a distinctly human variety. A lavish, expansive remake of the 1947 noir, the story follows the rise and fall of a charismatic conman, Stanton Carlisle (Bradley Cooper), who endears himself to clairvoyant Zeena (Toni Collette) and her has-been mentalist husband Pete (David Strathairn) at a traveling carnival. Stanton learns the secrets of their phony mind-reading act and uses the newly acquired knowledge to grift the wealthy elite of 1940s New York society. With the virtuous Molly (Rooney Mara) by his side, Stanton plots to con a dangerous tycoon (Richard Jenkins) with the aid of a mysterious psychiatrist (Cate Blanchett) who might be his most formidable opponent yet.