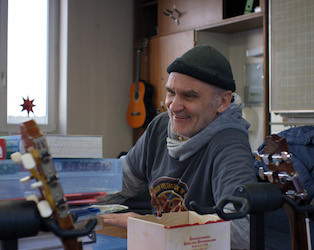 Dieter Bachmann, an unflappable and delightfully eccentric 64-year-old teacher, presides over a class of teenage girls and boys in Stadtallendorf, a small town in the Hesse region of Germany. His pupils are from a range of immigrant backgrounds, predominantly Turkish, but also Romanian, Bulgarian, Sardinian, with some still mastering the language of their new home. Herr Bachmann is on the brink of retirement, yet remains eager to inspire his students with a sense of curiosity for art, cultures, and ideas far beyond the curriculum. Emotionally engaged and ever patient, he empowers the children academically while coaxing them to think independently and to ultimately support one another as a community of young equals.