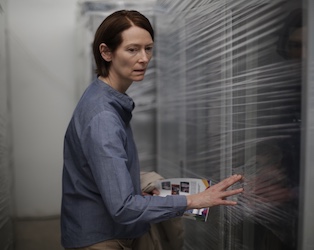 Executive produced by lead actress Tilda Swinton, the new film from Apichatpong Weerasethakul, director of the Palme d’Or-winning Uncle Boonmee Who Can Recall His Past Lives (2010), focuses on the travails of Jessica (Swinton), a woman in Colombia to visit her sister, who has been struck by an illness of undetermined cause. While in this unfamiliar environment, Jessica is haunted by a sound apparently inaudible to those around her, a sound that is not limited to any particular location or circumstance. Drawing on various resources and encounters, including an anthropologist (Jeanne Balibar) and a man (Elkin Díaz) who claims unusual powers of memory, she attempts to discover its origin and meaning. Contemplative and absorbing, Memoria is a film of lyricism and mystery, the singular style of which will be familiar to those who have followed the work of its director.