Two couples meet in the privacy of church antechamber; it swiftly becomes apparent that Jay and Gail (Jason Isaacs & Martha Plimpton), visibly tense upon arrival, are the parents of a teenage boy who was killed in a school shooting six years previous; the other couple, Richard and Linda (Reed Birney & Ann Dowd), are the parents of the shooter. With the action mostly confined to an anonymous room, one might assume that Mass is an adaptation of a stage play, but writer-director Fran Kranz conceived the scenario for film, recognising the intimacy the medium can bring to such a fraught scenario. The enthralling film takes a highly explosive situation and, through deft writing and committed performances, turns it into a study of four characters in crisis, and a debate on who or what is to blame for violence in our society. 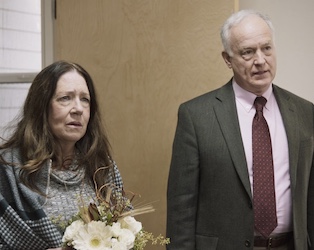