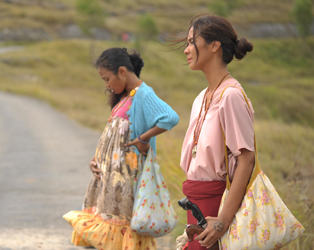 This film was released 20th April 2018, and is no longer screening.

The spirit of Sergio Leone is playfully invoked in Mouly Surya’s revisionist, defiantly feminist take on the classic western themes of vengeance and justice. The film plays out against the ravishing widescreen vistas of rural Indonesia, the twanging guitars on the score being intentionally redolent of Ennio Morricone’s Dollars trilogy.