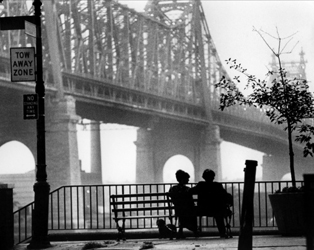 Woody Allen was famously so unhappy with Manhattan that he wanted to offer United Artists a new project for free if they would agree not to release it, a position that will no doubt seem baffling to audiences revisiting the film or seeing it on the big screen for the first time in this new digital restoration.

Allen plays Isaac, a comedy writer whose ex-wife (Meryl Streep) is now living with a woman. Isaac is dating 17-year-old Tracy (Mariel Hemingway), but is attracted to Mary (Diane Keaton), who is having an affair with a friend of his.

From its iconic opening, which sets cinematographer Gordon Willis’ beautiful black and white images to the strains of Gershwin while Allen’s voiceover extols the city, Manhattan is a seamless blend of comedy, romance, and drama, and one of Allen’s most satisfying films.