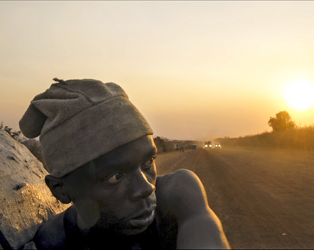 The arduous journey of a rural Congolese charcoal maker (‘makala’ means coal in Swahili), as he first prepares and then transports his precarious burden on top of a bicycle to sell in town, is the unlikely subject of Emmanuel Gras’s profoundly moving, experiential film, a deserving winner of Best Film at Cannes Film Festival’s Critics Week 2017.

The director shadows his subject, 28-year-old Kabwita Kasongo, on his lengthy and grueling trek without engaging or resorting to sentiment, and as such Makala is an extraordinary piece of documentary observation. (Notes by David O’Mahony.)