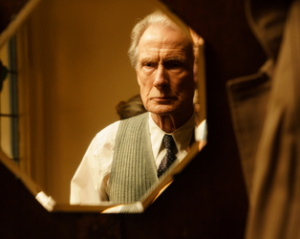 Mr. Williams (Bill Nighy) is a reserved, diligent, English gentleman, working as a mid-level bureaucrat in post-war London County Council, presiding over a small team who live in respectful fear of their taciturn superior. His entirely unremarkable life is derailed when his doctor gives him the news nobody wants to hear: he is terminally ill with mere months to live. In the clumsy manner of one unaccustomed to such things, Mr. Williams attempts to experience some fleeting pleasures before settling on one final purpose, the construction of a children’s playground. In remaking Ikiru, Akira Kurosawa’s 1952 masterpiece, Oliver Hermanus could be accused of overreach, but his exquisitely realised film, sensitively adapted by Nobel and Booker prize-winning author Kazuo Ishiguro, and gorgeously filmed in sunset tones, is a triumph on every level, and is distinctive enough to exist alongside Kurosawa’s classic.