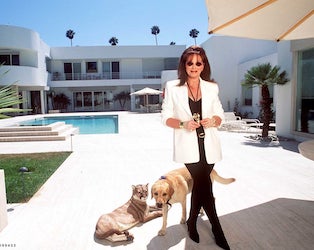 With more than 500 million copies of her 32 novels sold in 40 countries around the world, several of which were adapted for popular movies and TV specials, Jackie Collins rose to the very top rungs of Hollywood celebrity with her tales of glamorous lives, fabulous wealth, sensational scandals, and, always, powerful women calling the shots. Spinning fact and fiction, this feature documentary tells the untold story of a ground-breaking author and her mission to build a one-woman literary empire. Narrated by a cast of Jackie’s closest friends and family, the film reveals the private struggles of a woman who became an unlikely icon of 1980s feminism whilst holding her personal vulnerability behind a carefully crafted, powerful, public persona.