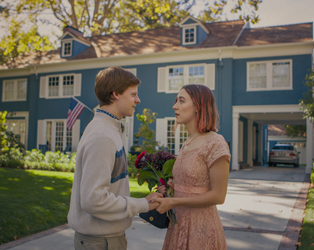 This film was released 23rd February 2018, and is no longer screening.

Writer/actor Greta Gerwig (Frances Ha, Mistress America) effortlessly transitions to the role of director for her début feature, a semi-autobiographical account of coming-of-age in Sacramento in 2002. Working from her own script, Gerwig manages to breathe new life into the rites of passage subgenre, approaching many familiar moments – first love, prom night – with great flair and imagination. Saorise Ronan shines as Christine ‘Lady Bird’ McPherson, a restless 17-year-old navigating her way through the pitfalls of Catholic school, her modest academic prowess being no obstacle to romantic dreams of college life on the east coast. Lady Bird’s complex relationship with her mother (Laurie Metcalf) underpins her often chaotic life and their many exchanges adroitly capture the nuances of a close mother-daughter bond.