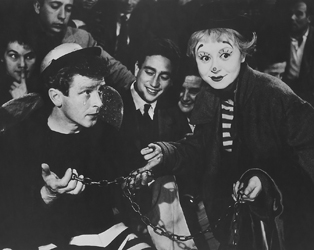 The winner of the first Academy Award for Best Foreign Language Film, Fellini’s fourth feature begins with the young and beautiful Gelsomina (Giulietta Masina) being sold by her mother to brutish street performer Zampanò (Anthony Quinn), whose income is derived from his strongman act. She becomes his assistant, struggling to learn the ropes, her naïve eagerness to please met with nothing but cruelty.

The two encounter another street performer who goes under the title of ‘The Fool’ (Richard Baseheart), who becomes a rival for Gelsomina’s affections when the three find themselves employed by the same travelling circus. However, The Fool’s constant needling of Zampanò, combined with the jealous and thuggish nature of the latter, ultimately results in tragedy. Simple and poetic, La Strada saw Fellini moving away from his neorealist roots and into what would become known as the ‘Felliniesque’.