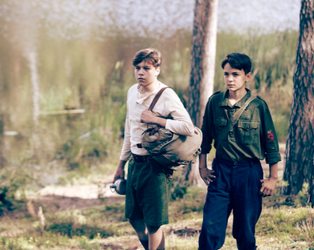 Perhaps taking its cue from Elem Klimov’s Come And See (1985), the powerful Young Eagles depicts the changing lives of three Polish children following the invasion of their country by the Red Army in September, 1939. Seduced by the glamour of defending their homeland and repelling the invaders, and also in the hopes that their dedication to the cause will impress Ewelina (Almira Nawrot), the object of their affections, Leoś (Feliks Matecki) and Tadek (Wit Czernecki) are instead faced with the atrocities common to war, even becoming complicit to varying degrees without fully understanding the dreadful consequences of their actions.