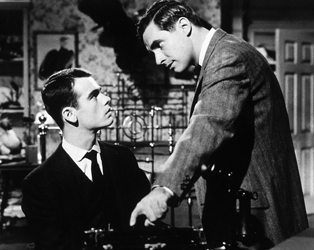 Richard Fleischer made a number of films throughout his career that focused on real life killers, including The Boston Strangler (1968) and 10 Rillington Place (1971). Compulsion is based on the infamous 1924 Leopold and Loeb case that also provided the inspiration Alfred Hitchcock’s Rope (1948) and Tom Kalin’s Swoon (1992).

Here, close friends Judd Steiner (Dean Stockwell) and Artie Strauss (Bradford Dillman) are the egotistical pair who murder a boy simply for the thrill, convinced that their preparations and intellectual superiority will obviate all consequences. When this assumption proves incorrect, their case is taken by famed attorney Jonathan Wilk (Orson Welles, in a part based on Clarence Darrow).