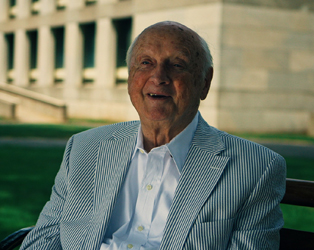 This film was released on Friday 13th October 2017 and is no longer screening.

The screening on Friday October 13th at 18.30 was followed be a Q&A with director Mark Noonan and Dr. Sandra O’Connell (The Royal Institute of the Architects of Ireland), hosted by filmmaker Aoife Kelleher.

Still working at the age of 95, Pritzker Prize-winning Irish-American architect Kevin Roche is an enigma. He is at the very top of his profession but has little interest in fame or fortune. Roche’s architectural philosophy is that “the responsibility of the modern architect is to create a community for a modern
society”. To this end, he has brought nature into many of his buildings to ensure the well-being of those who live and work in them.

Mark Noonan’s documentary is a visual feast, relying less on the well-chosen words of the expert contributors and more on Kate McCullough’s crisp and creative cinematography to introduce us to Roche’s glorious spaces such as the Oakland Museum, California, New York’s Metropolitan Museum of Art, where Roche was principal architect for over 40 years, and the Convention Centre Dublin.