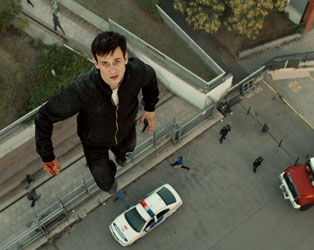 This film was released 5th January 2018, and is no longer screening.

In previous films such as Johanna (2005) and White God (2014), Hungarian director Kornél Mundruczó has often placed his characters at the centre of mysterious and often inexplicable events. In the genre-bending Jupiter’s Moon, which premiered in competition at this year’s Cannes Film Festival, Mondruczó first introduces us to Syrian refugee Aryan (Zsombor Jéger) as he and his father attempt to enter Hungary. As their plan goes disastrously awry, Aryan is shot by police officer László (György Cserhalmi). However, instead of dying, he literally floats away, having acquired somehow the ability to levitate at will, eventually arriving in the company of the unscrupulous Dr. Stern (Merab Ninidze), who sees an opportunity to exploit both Aryan and his own seriously ill patients by presenting the young man as an angel. Visually dazzling, this is a film unafraid of tackling large ideas.