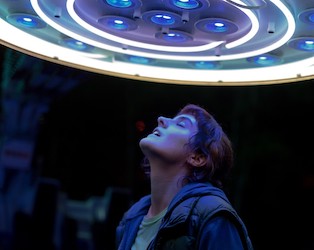 Jeanne (Noémie Merlant, Portrait of a Lady on Fire), a shy young woman, lives at home with her uninhibited bartender mother, Margarette (Emmanuelle Bercot), and works as a cleaner at an amusement park. Her mother wants her to meet a man, but Jeanne prefers tinkering with wires, light bulbs, and spare parts. During her late-night shifts, she becomes enamoured with Jumbo, the new Tilt-A-Whirl ride, and is seduced by ‘his’ dazzling lights, smooth chrome, and oily hydraulics. Surprising though it might seem, Zoé Wittock took inspiration for Jumbo from the incredible true story of Erika LaBrie, an Olympic gold winner in archery, who married the Eiffel Tower in 2004 and became Erika Eiffel. A highly imaginative, visually striking romance, Jumbo is, at heart, a film about tolerance and acceptance of love in all its multifaceted forms, and Jeanne’s sexual awakening can readily be interpreted through a queer perspective.