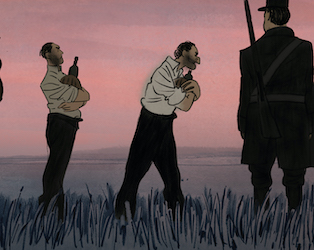 February 1939. Serge is a gendarme on the French border, when some 500,000 Spaniards seek refuge in France during the Spanish Civil War. Confined in appalling conditions in camps built by the French government, they barely have access to water and food. The gendarmes, many of whom are racist, call the Spanish ‘Red, Communist scum’. However, Serge is kind, and befriends refugee Josep. Sixty years later, in Paris, Serge tells his story to grandson Valentin, vividly recreated here in captivating animation. Editorial journalist, and award-winning cartoonist Aurel’s (aka Aurélien Froment) debut feature is inventive and beautiful, inspired by the life and work of the late Catalan illustrator and caricaturist Josep Bartolí, a Republican fighting against Franco’s regime.